I forget how far we are away in Australia from the rest of the world until we have to travel somewhere. We flew out of Sydney on QATAR & it was 15 hours to Doha. We tried to sleep & I think I got about 5-6 hours of very broken sleep.. probably better than nothing. It was a 4 hour layover in Doha then 8 hours to Casablanca. Our bags were literally last off the plane & by the time we found our pick up point the time was getting on. To add to my confused mind, Morocco has recently changed their time zone so they are now 1 hour ahead GMT so when I thought we got in at 2pm we actually got in at 3!

We were driven to our hotel (Kenzi Basma) & after a very quick bag drop off & splash of water on the face we were back downstairs to meet our fellow travellers. There are 12 of us altogether & our guide for the tour Abdul went over the basic itinerary. Rod & I then dashed back to our room, had a quick shower then we joined our group for dinner at a local restaurant our guide introduced us to. We had a fabulous dinner in a lovely atmosphere. Tiled walls, velvet covered lounges, incense. I thoroughly enjoyed my first tagine. Alas no wine or beer though so we had a nightcap at the bar at the hotel then it was off to bed for Rod & I .. couldn’t wait to lie down!

Up at 6am this morning we enjoyed the view out the window of our room looking towards the Hassan II Mosque and listening to the “call to prayer” drifting over the flat concrete rooftops as dawn was breaking . After a delicious breakfast we were onto the bus headed north to Meknes. Originally settled in the 10th century, it developed into an imperial city of Moulay Ismail in the 17th century.

The initial drive along the motorway was uninspiring being urban & very flat but it wasn’t long & we were looking at rolling green hills, orchards of olive trees, cork trees, barley & wheat fields dotted with donkeys and sheep. It is actually very like Italy to look at & definitely wasn’t what I was expecting. It was charming to see a farmer ploughing his field with a horse drawn plough & a family on a horse drawn cart.

There are very few fences here (& definitely no barbed wire as in South Africa) & the cows wander along the sides of the roads. The farmers obviously know where their lands end & you have to wonder if there are ever issues amongst neighbours regarding encroachments etc.

We arrived at Meknes & picked up our local guide. The first gate to the Medina was photographed madly by us all then it was in through the second wall & we visited the granary & stables of King Moulay Ismail. The granary was extensive & very cleverly constructed. The stables were also very impressive having once housed 12,000 Arab horses. The stables were very cleverly constructed so that the keepers could see down aisles in a diagonal manner thereby maximising their vision of their charges. 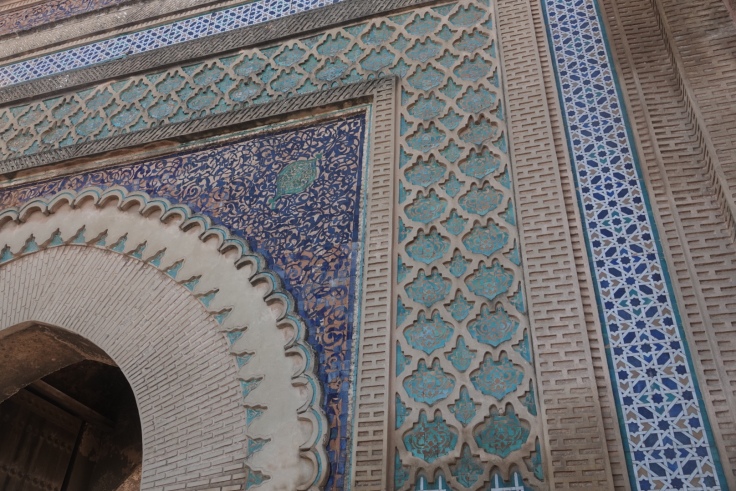 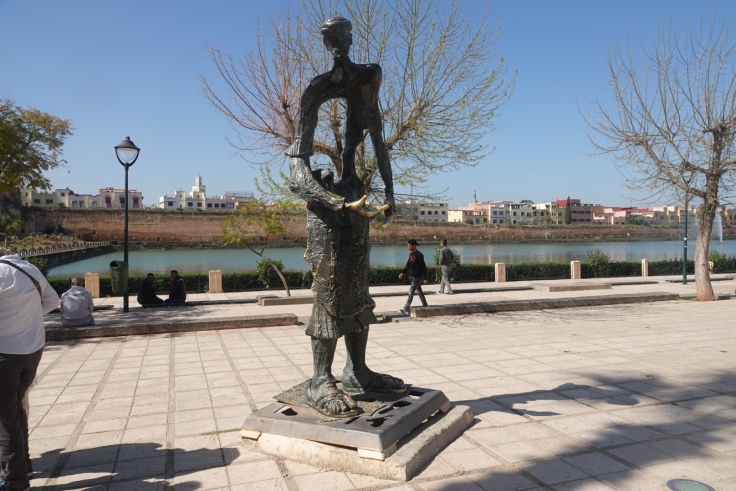 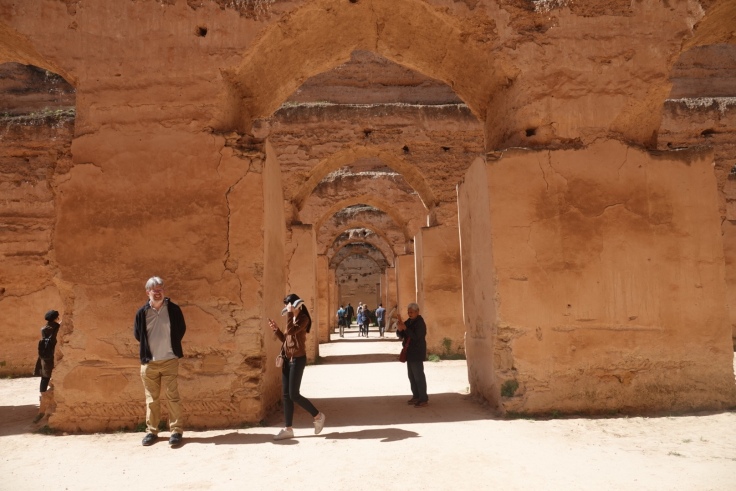 Bab el- Mansour was our next stop & indeed was very beautiful. It was the original gate into the imperial city & is covered in beautiful tiles & flanked by marble columns. Opposite the gate is the main square Place el-Hedim where once there was a kasbah. It was knocked down to make way for this plaza that was used for announcements and executions. We wandered & watched the odd lady with the ostrich, the snake charmers & the poor little monkeys tethered by chains.

We enjoyed a nice lunch (for me it was couscous with vegetables) but again the absence of a beer or wine was noted. This might actually be the first holiday I lose weight.

Back on the bus it was a short drive to Volubilis, ruins of an ancient Roman metropolis. Unfortunately it was largely destroyed by earthquake.. the same one that damaged Lisbon in 1755 as Portugal & Morocco are on the same fault line. We had a wonderful tour through the ruins led by a budding stand up comedian. There are some wonderful remainders of the city & some of the murals were amazing.. incredible to see them last all these hundreds of years. As with Pompeii & the Forum in Rome, & Ephesus, it is incredible to walk in the steps of those that were here hundreds of years ago. 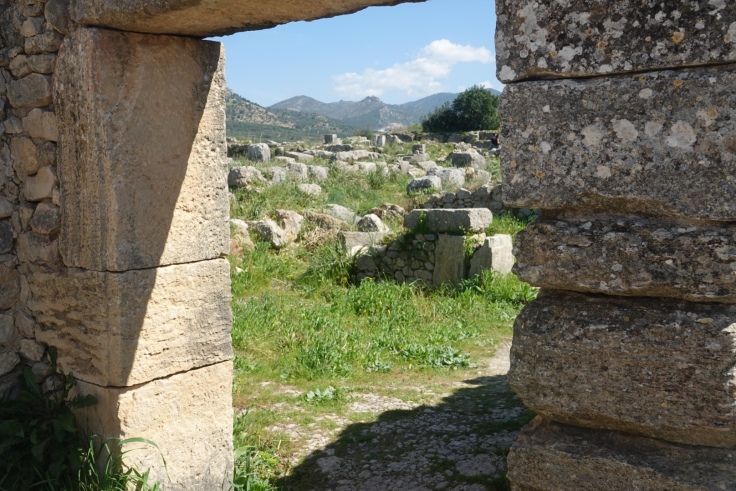 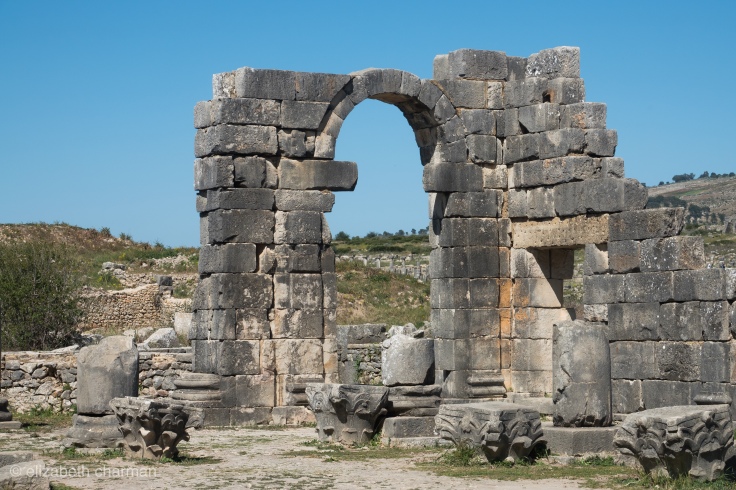 From Volubilis we drove to Fes. An interesting drive with the Atlas Mountains on one side and the Rif Mountains on the other. The area between Casablanca & Fes is incredibly fertile and definitely way greener than what I expected.

We arrived in the new section of Fes. New in that it was built by the French in the early 1900’s & you can certainly detect the French influence with large boulevards & cafes with outdoor chairs etc.

We checked into the Pickalbatros Royal Mirage which had the feel of something straight out of the 1970’s. We enjoyed another great meal at a little restaurant our guide took us to within walking distance of the hotel. Tonight I enjoyed a beef tagine.. the meat was so tender it almost melted.

3 thoughts on “Casablanca to Fes via Meknes & Volubilis”